It's only been a few weeks, and already there are a lot of misconceptions and myths floating around Google+. Let's take a deep breath, and tackle some of the more prominent ones.

At the onset, many respectable media outlets were reporting that most Google+ users were male, and claiming that this was a huge problem if Google+ wanted to attract a more mainstream audience. However, the numbers that were reported were skewed because they relied on two sites - SocialStatistics and FindPeopleOnPlus with skewed data. Socialstatistics uses self-reporting for its data, and FindPeopleOnPlus uses a crawler to index data, which can be slow and has a hard time finding everyone. Based upon those numbers, reports ranged from 75% to 90% male.

Unofficial Google+ statistician +Paul Allen, who accurately predicted when Google+ surpassed 10 million users, also ran his own numbers, based on random surname sampling, and found that Google+ is actually more like 66% male, with the female adoption rate increasing everyday.

Generally, geeky Google product launches will tend to have a higher adoption rate by males because the tech industry is majority-male. We can debate whether this is a good thing, but Google+ is not inherently a sexist product. We saw that the Google+ team responded rapidly to criticisms and concerns over making gender public on Google+ profiles. Many of the Google community managers are female, so it's clear that they are actively working on making Google+ a welcoming space for women and not just another boys' club.

Myth #2: Google Owns Everything You Upload

Every time Google comes out with a new product, it seems like there's concern that they will own everything you produce - status updates, blog-like musings, photos, etc. A professional photographer found himself in the middle of controversy when he decided he could not accept Google's Terms of Service.

I will let +Ryan Estrada explain the Terms of Service in an easy-to-understand manner with this comic: 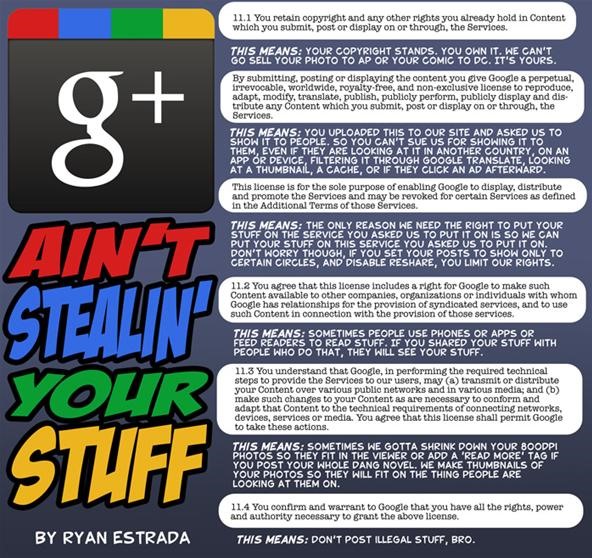 To sum up - you can keep your copyright, but Google needs you to grant them the right to display stuff you upload to them.

Myth #3: Google+ is Not as Private as Advertised

I've seen apprehension from friends and acquaintances that Google is somehow out to get them by enticing them into a new social network. They are convinced that somehow Google+ is not as safe, or not even as private as Facebook or other social networking sites.

One thing to keep in mind is that Google+ is a beta product. It is not finished, so it is possible that there are still some privacy loopholes that may not have been flushed out yet. We have our own privacy guide for what to watch out for on Google+.

If you are on Google+, you can help improve the experience by sending feedback whenever you encounter something that seems off. Google has been very responsive to criticism and requests for improvements. They closed a loophole that allowed sharing of limited posts, and they no longer require you to disclose your gender publicly.

Just keep in mind, your Google+ experience is as private or as public as you make it. You do not have to create a profile, and if you do, the minimum required public info is your name. Whenever you make a post, you can decide if it should be shared publicly, with extended circles, with limited circles, with specific individuals, or even with no one at all.

What are your concerns with Google+? Tell us in the comments or in our forum.

This doesn't really particularly make sense to me since many teenagers I know have been using Google for Gmail/Picasa etc forever, and most social networking services let you use them once you're 13. There's been a few stories of people being locked out of their Gmail accounts once they fill out the DOB for Google+, so uh...tell your friends to back up their email.

I disagree with #2 and the "easy to understand" comic, they do own everything you post/upload and can do whatever they want with it as long as you do not already have a copyright on your material.

Jeremy, if you are the original creator of the material, then it is automatically copyright to you. Check out the FAQ on the US Copyright Office: http://www.copyright.gov/help/faq/faq-general.html#what

"When is my work protected?
Your work is under copyright protection the moment it is created and fixed in a tangible form that it is perceptible either directly or with the aid of a machine or device.

Do I have to register with your office to be protected?
No. In general, registration is voluntary. Copyright exists from the moment the work is created."

Thus, Google does not own anything you upload or post, if you are the original creator.

I didn't realize that, I like to err on the side of not trusting social websites with my data.