Facebook unveiled a lot of changes last week, and, as usual, it's causing a lot of consternation and controversy. People within my Facebook, and on Google+, keep asking how to remove the ticker, and are trying, and mostly failing to make sense of the changes.

I've decided to take a break today from Google+ and find out everything there is to know about the new Facebook. On first glance, the new Facebook seems like a lot of work. Whereas before all you had to do was friend people and see their status updates in a reverse-chronological stream, now you get to mark "Top Stories", engage in other actions besides "like", and "subscribe" to people you want to track.

Timeline is the New Profile

Your current Facebook profile is pretty run-of-the-mill - it lists your information, your interests and your status updates. The new version, Timeline, is almost like an autobiography in the way it's laid out. You can see everything, from the pictures you've taken, the friends you've made, the places you've checked into, the apps you use, all in one spot. If you have favorite memories, you can star them to feature them, or choose to remove them. You can share the music you're listening to, the books you're reading, or the movies you're watching with your friends.

(Note: It's not available for most people yet, but it is rolling out. You can enable Timeline if you really want to, but I'd only recommend doing so if you are actually an app developer.) 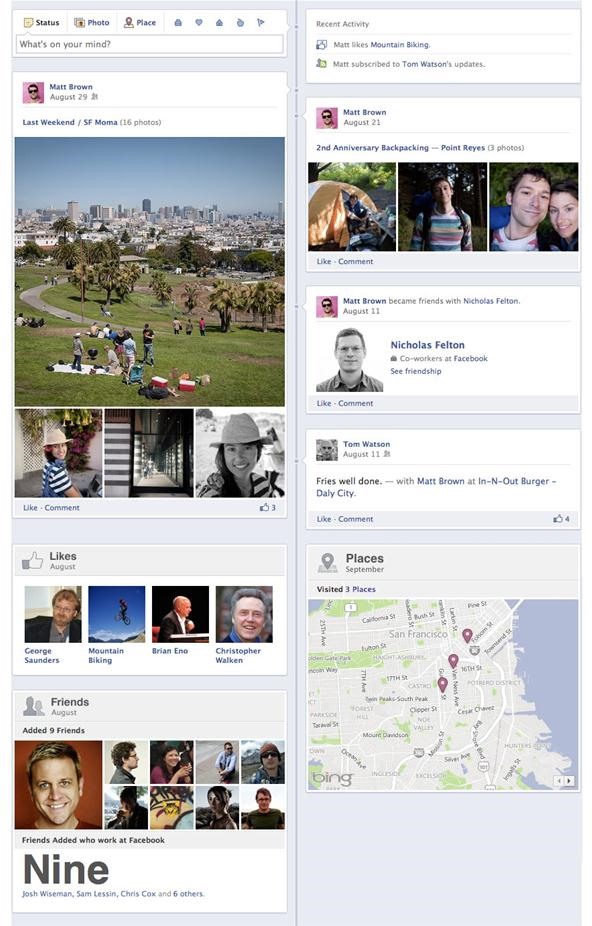 The new Facebook ticker may be one of the most annoying changes introduced so far. Basically, in addition to your main news stream in the center, there's a news ticker on the right-hand side that tells you everything in the news stream, plus a lot of stuff you probably don't care about, including who's listening to what song on Spotify, who commented on a status from someone you're not connected to, who got tagged in a photo you may or may not want to see. Unfortunately for people concerned with privacy, the ability to control what shows up on other people's tickers is pretty limited. 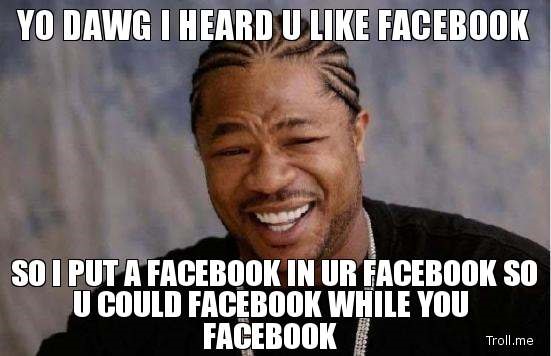 To hide the ticker, you can try out these Firefox and Chrome extensions. To control what your friends see about you, and what you see from your friends, follow the instructions here.

Now in your main stream, the news feed is no longer mainly chronological. The very top few updates will show your "Top Stories", and then below that you'll see more "Recent Stories". If something's not already a Top Story that you think should be, you can mouse over the gray triangle to the left, and click on "Mark as Top Story". And conversely, if something floated to the top that you don't think should be a Top Story, you can remove it via that same triangle. 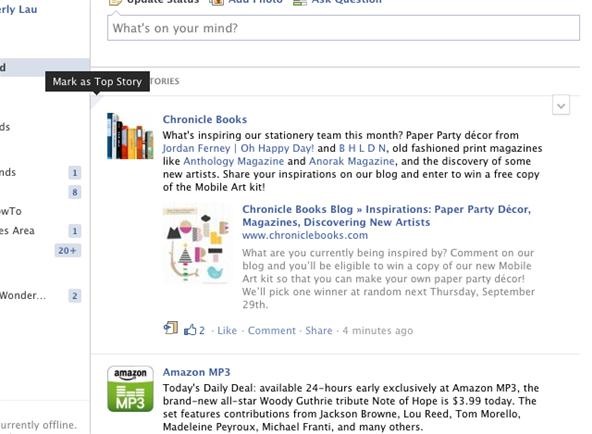 Do you remember Facebook Beacon? Originally, when it launched in 2007, it caused a lot of controversy because it opted people into sharing actions with their friends that they might not necessarily want to share. For example, if you bought movie tickets from MovieTickets.com, it would share that with all your Facebook friends via your news feed. The service was shut down in September 2009 due to privacy concerns.

Now, people are a lot more used to sharing their activities with their friends. We "check in" to places, we share photos, etc. Facebook is banking on this new type of sharing to be less scary, and something you can opt into, just once. For example, if you join the new Guardian Facebook app, you'll add it to your Timeline, and share any article you read on the Guardian website with your friends. You are asked once to select who the activity is visible to. Once you've completed the process, everything you read on the Guardian website is shared with your friends, until you change the settings again. 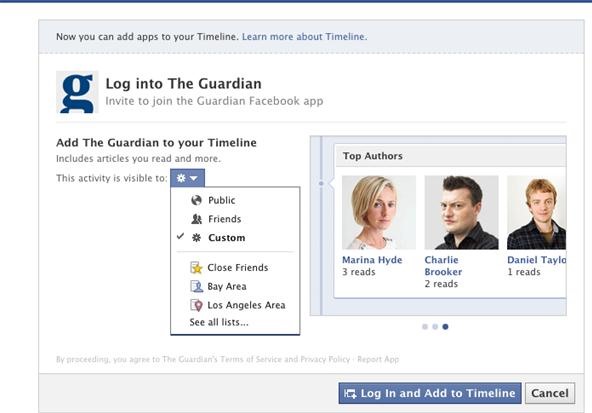 In a move that seems calculated to compete with Google+, you can now "subscribe" to people you don't know and aren't friends with on Facebook. You are automatically subscribed to the people you are already connected to, and you'll see most of their updates, if they haven't changed their settings. However, you might not see all of their updates, because unless you've marked a friend as a "Close Friend" via the Smart Lists, you will see only "Most Updates", and not "All Updates". 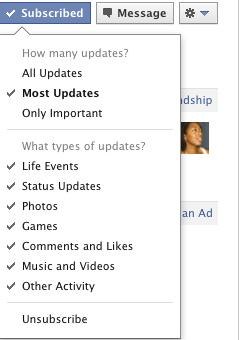 If you want to be selective about what sort of updates you want to see from friends, you need to go to each friend's profile, and click on the "Subscribe" button. Uncheck everything you don't want to see in your feed.

Frankly, this seems like a lot of work; I think Facebook is counting on you not really caring what updates you see, as long as you get most of them. This way, you'll be able to see all the games your friends played, everything they liked, and everything they commented on.

If you want your own subscribers, just go to your profile page, click on "Subscriptions" on the left, and select "Allow Subscribers". When you make a status update, you can decide to make it "Public", and it means that anyone who's on the Internet can see what you shared.

Facebook has included a page describing best practices for public figures and how they should use the Subscriptions feature.

Facebook introduced "Smart Lists" a few weeks ago, which looks really similar to Google+ circles. When you enable it, you'll start out with the Close Friends, Family, Acquaintances, and Work groups, and from there, you can just add people to it based on the suggestions that Facebook gives you. And it'll also pull up groups that you may have created before the introduction of Smart Lists and forgotten about. In my experience, it worked pretty well, and was less labor-intensive than Google+ circles.

Using the Smart Lists is optional, and you don't have to enable it if it's not something that appeals to you.

With every change they've made, Facebook always draws a lot of criticism for overlooking or dismissing privacy issues. Nik Cubrilovic wrote on his blog that logging out of Facebook isn't enough to stop Facebook from tracking you. According to him, "There are serious implications if you are using Facebook from a public terminal. If you login on a public terminal and then hit 'logout', you are still leaving behind fingerprints of having been logged in. As far as I can tell, these fingerprints remain (in the form of cookies) until somebody explicitly deletes all the Facebook cookies for that browser. Associating an account ID with a real name is easy - as the same ID is used to identify your profile." (Note: I am not a programmer or coder, so I can't verify his claims, but they sound legitimate.)

The only current possible solutions I can think of to work around this serious issue are to:

What else do you want to know about the new Facebook changes?

I just so not understand!!! When I go too a friends page the timeline is scattered... Has at the top most recent then below it jumps all over the place I do not want timeline it sucks!!

If you need a great Facebook cover check out www.addacover.com