+Eric Cattell, the Social Graph Technical Lead of Google+, announced a lot of improvements and added features this morning, most of them having to do with circle management and blocking people.

You can now invite people with just a single link, in addition to inviting people individually. If you click on the "Invite friends" button on the right side of your stream, you'll get a pop-up screen with the usual "Invite people by email" dialog, and you'll see underneath a link for you to "share" with a group of people. Just copy and paste it somewhere where people can access it. You can also use a URL shortening service like bit.ly to create a shortened link to share on Twitter. Note that you are limited to 150 invites.

If you still don't have an invite, here's my link.

The ability to block people on social networks might be one of the best features on any social network. Block users you don't like. They'll never have to know that you blocked them.

Blocked users are no longer in a red circle, instead you're given a new menu to use. Just go to your circles page, and click on the "More actions" link. From here, you can choose to block your selected people. You'll get a dialog box explaining to you what blocking does, and what blocked users are and aren't able to see. Blocked users are removed from your circles, and you won't see content from them. They won't be able to +mention you or comment on your posts, although they will still be able to see your public content.

If you click on the "Report and block these people" button, you can select from a list of reasons why they are in violation of Google's Community Standards. 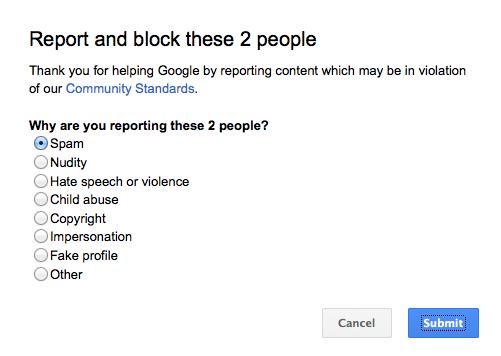 Otherwise, you can just click on the "Block" button to block people without bothering to report them. You can view the list of people you've blocked, and choose to unblock them if you'd like.

Since there's no longer a "block" circle, this means that you no longer have to see the profile pictures of people you've blocked (useful for people who've blocked their exes), and sharing with all your circles and extended circles means that they can no longer see your content.

Other improvements addressed the inaccurate follower counts, which are now calculated correctly. If someone has commented on your post, you can +reply to them, even if they do not have "find me in search" enabled. The rationale is that if someone's commenting on your post, they must expect a response from you.

I want to be ale to block people from reading my PUBLIC POSTS as well. Why can't I block a stalker?! I don't want them to be able to read ANYTHING of mine.