Increasingly, I'm turning to Google+ as a source of news, and it looks like I'm not the only one. On Thursday, news of a small earthquake broke on both Twitter and Google+. One curious user, +Keith Barrett, decided to try and find out which social network was faster with the news. Turns out it was a tie. As Google integrates Google+ more closely with the rest of its services, and more users post relevant stories, I think we'll start to see Google+ as a place that can create and break stories, as well as share them.

This week was a great week for news, and luckily, since Google+ enabled hashtags, many people are starting to tag their posts. Below, some of the most interesting ones to follow this week:

Google+ Photos Gets a Few Tweaks

Google seems to be really focused on tweaking Google+ Photos. With over 3.4 billion uploaded photos, it may be the most popular feature from Google+, aside from Hangouts. Friday evening, +Roshni Malani announced a minor but significant change to Google+ Photos. When you open a Google+ Photo album, you'll also see at the bottom, the very first post that shared the album, along with +1s and comments.

Earlier in the week, +Tim St. Clair told us that now we can change how our albums are shared, and from one menu, lock the album, change who the album is shared with, and hide geographical information on the album itself.

This week brought more news about overall Google updates. Google is getting closer to its promise of "Google+ is Google", with more features unveiled in Google Docs, Google Reader, Google Alerts, and Gmail.

In Google Docs, you can now edit your settings to create new presentations with the latest version of the presentation editor. All you have to do is go to https://docs.google.com/settings, and check the appropriate box. On this page, you can also choose to enable right-to-left controls, for Hebrew and Arabic documents, and also enable Google Analytics to track your published documents. 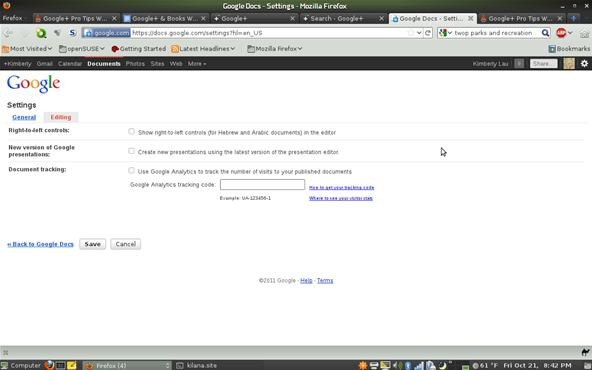 Google accidentally leaked a preview of the upcoming Gmail re-design, and the Google Operating System blog snagged a few screenshots and the official video. Overall, it looks more slick, and seems to offer more flexibility, and a tighter focus on the people in your contacts.

I'm pretty excited about the upcoming changes being announced to Google Reader. In the near-future, Google Reader will no longer have separate follow lists, or shared link blogs. Those social features will be retired and integrated into Google+. The Google Reader blog acknowledged that this might not be a desirable outcome for many Google Reader users, and is offering them a way to export subscriptions, starred items, friends, likes, and shared items.

At the 2011 Web 2.0 Summit, VP of Social +Vic Gundotra and Google co-founder +Sergey Brin found themselves bombarded with questions about Google+, identity, strategy, and social networks. If you missed the conversation earlier, you can catch the YouTube video here:

+Tim O'Reilly also interviewed +Sergey Brin, discussing the work on Google's autonomous care, whether Google would get back into Google Health, and of course, Google+. Onstage, Brin had admitted that he was not himself a big social network user, but he found Google+ "instantly compelling".

At the AsiaD conference, VP of Product  Management for Google+ +Bradley Horowitz joined Peter Kafka to discuss exactly what Google+ is, how it's growing, and what it will look like in the future. He said, "Buzz was in the older model of Google, its bottoms-up, let-a-thousand-flowers-bloom mode. Now the company is trying to take its best flowers and make a bouquet. I think we are doing less throwing things at the wall. People are aligning around fewer efforts. It's a very healthy thing for this company."