Google announced a lot of great feature updates this week! Most of them are content-related, and help you more easily find out what's going on in the overall Google+ community.

One of the most aggravating issues with Google+ since the start was that it did not support Google Apps users, most of whom are Google's paying customers. Google+ has finally been enabled for Google Apps, and people who part of organizations that use Google Apps can now participate on Google+, but with some caveats.

Google outdid itself this week with the implementation of really interesting and innovative features. They introduced the What's hot feature, which tells you the most popular posts on Google+ at the moment. Apparently what's really hot right now are funny pictures with captions. (Thank you, ICanHasCheezburger and +Ben Huh.) In addition to the video below, +Yonatan Zunger explained in a Google+ post more about what you can get out of this feature, and how they are working to avoid an echo chamber of popular Google+ denizens.

If you've ever been fascinated by popular posts on Google+, how many times they're shared, +1'd, or commented on, you should check out the new Google+ Ripples feature. It's a little difficult to explain, but it basically lets you visualize how a post you see or a post you've made can spread out to different people. 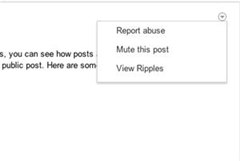 +Louis Gray posted 10 examples of amazing Ripples to check out, including +Ron Garan's picture of the moon, +Felicia Day on the importance of RSS, and +Sergey Brin's remembrance of Steve Jobs. To check out a Ripple, just click on the upper-right hand corner of a post, and select View Ripples.

You can even see +Louis Gray's own Ripple for his post about it. 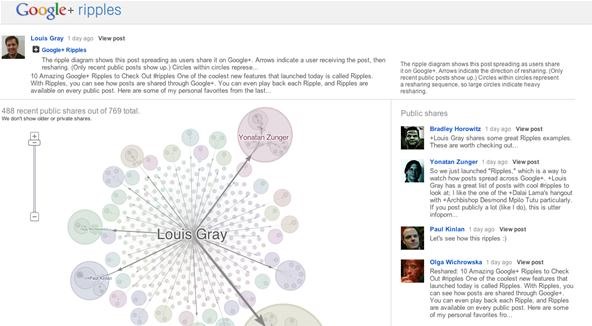 +Ryan Crowe had a very interesting write-up and analysis of the feature, which proposes that you can potentially use the feature to expand your reach and influence on Google+ itself.

Google+ added a fun "Creative Kit" to your Google+ Photos section. It turns editing your photos from being a painful chore to a fun activity.

To take advantage of this feature, select a photo you want to edit in Google+ Photos. Click on Edit and select Creative Kit. A large screen will pop up, and provide with options to edit and add fun flourishes and text to your picture. Until the end of October, you can have fun with a Halloween editing kit. Show off a Halloween-ified photo on Google+, and tag it #gplushalloween. A panel of celebrities will be announcing their favorite spooky photos on November 3.

+Punit Soni informed us about the addition of five more games to Google+. They include CityVille, Global Warfare, Mafia Wars, 2, Resort World, and Triple Town.

I've been finding it fun to follow some of the most popular hashtags on Google+. It's a great way to look out for people with the same interests as me, and follow the latest news and updates about anything controversial. Below are some of the more interesting hashtags I've come across in the past week.