Since its inception, Google+ users have been a loud, vocal bunch, and they've made their displeasure known about many issues, especially on the lack of support for pseudonyms, Google Apps, and brand pages. It's been especially galling for many Google loyalists, who found their Google+ profiles suspended, when they ended up violating the Google+ "common name" policy.

Many Improvements to Come

At the Web 2.0 summit in San Francisco today, VP of Engineering +Vic Gundotra confirmed that support for pseudonyms would be rolled out soon, but did not provide details about what that support would look like. It could take any number of formats, from allowing people to just sign in with their Gmail username, to requiring users to provide Google+ with a real name and the ability to use multiple user names or handles per circle.

You can view the livestream broadcast with +Vic Gundotra and +Sergey Brin, here, where they discussed many issues related to Google+. +Sergey Brin acknowledged that he himself was not a very social person, and had not been able to successfully use Facebook, Orkut or Twitter, much. But he found Google+ "instantly compelling".

In addition to pseudonym support, Google would also be rolling out Google Apps support, something many enterprise users have been requesting since the launch of Google+. The oversight seemed especially egregious, since many Google Apps account holders are paying customers of Google. Support for brand pages will also be forthcoming.

Gundotra made a few pointed comments about Facebook's new vision for "frictionless sharing", which enables apps to share many of their users' activities automatically. He said, "We do not believe in oversharing", and pointed out, "From a philosophical standpoint, there is a reason why every thought in your head does not come out of your mouth".

Although Gundotra and Brin were armed with some very impressive stats about Google+, such as over 40 million registered users, 3.4 billion uploaded photos, they continued to evade questions about how many people were actually actively using Google+. They did indicate that by the time Christmas rolls around, the Google+ strategy would be more apparent.

+Steve Yegge's infamous accidental posting of his rant about how Google didn't "get" platforms was also briefly discussed. Gundotra admitted that it did "hurt", but pointed out that it gave the public a rare glimpse into the internal culture at Google. "Larry and Sergey have fostered a culture of open debate and open dissent. I think it is one of the things that make Google great. And is why we didn't fire him."

Brin merely said that he couldn't finish the rant.

Minor Improvements Continue to Roll Out

+Tim St. Clair shared the latest updates to Google+ Photos today. Now, when you go to your Google+ Photo albums, you can change how your albums are shared, and from one menu, lock your album, change who the album is shared with, and hide geographical information on the album. 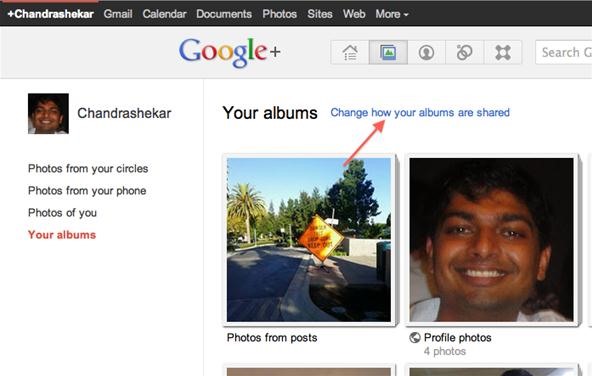 i want un suspend my google +

try posting your issue to their Google+ product forum