It may not seem like it, but it's been less than 90 days since Google+ was introduced to the world. Since then, we've seen many great features that have made Google+ one of the most attractive social networks around. Today, we've received even better news: major improvements and feature updates that are truly innovative.

The name of the Google+ instant group messaging feature has been changed from Huddle to Messenger, and along with it, you'll also be able to share photos with your Google+ circles.

This one core feature has been the number one item on my wishlist, and it's finally here! The search bar at the top, which was originally used to search for Google+ profiles, is now a general search for anything in Google+. Your results will default to "everything", but you can further refine the search by limiting it to Google+ profiles, public Google+ posts, or Sparks. You can sort the Google+ posts by "Best of", or "Most Recent" (though it's not clear what criteria is being used for "best of". You can also click on "Save this search", and it'll get saved to your Sparks pins, so that you can go ahead and search for the same term again. 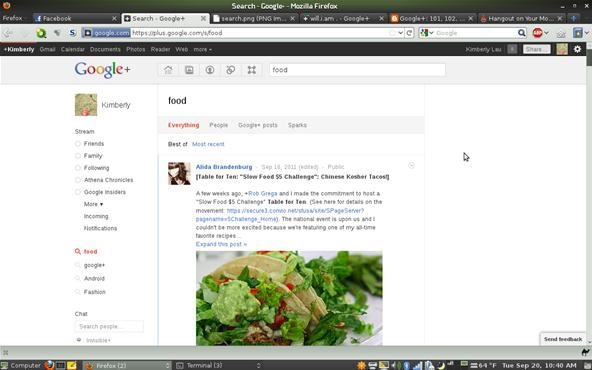 The hangouts on mobile phones is such a great feature!

No internet at the horse show. I will try using my phone to watch only