+Randall Munroe, the man behind the web's most popular web comic, XKCD, has always had a knack for getting to the heart of the larger social issues on the web. During the 1st 48 hours after Google+ started letting non-Googlers in, one of the most shared posts within its private walls was his latest comic about Google+: 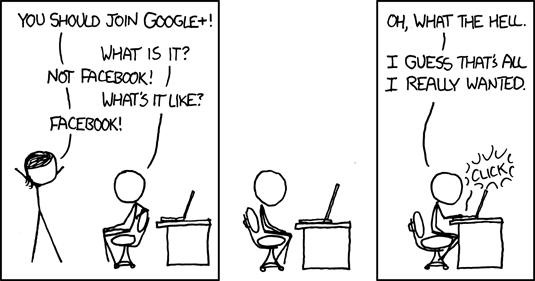 Today however he's raising a concern about the system's requirement that you publicly disclose your gender on your profile. Here's what he had to say:

"Google+ forces you to have a public gender in your profile (although it can be 'Other'). I know they have reasons for this, but I don't think they're good enough.

Many women grow up with a sense of physical vulnerability that's hard for men to appreciate. Our culture's relentless treatment of women as objects teaches them that they are defined by the one thing that men around them want from them—men who are usually bigger, stronger, and (like any human) occasionally crazy. This feeling—often confirmed by actual experiences of harassment and assault—can lead, understandably, to a lifetime of low-level wariness and sense of vulnerability that men have trouble appreciating. A male designer building an interface should try to keep in mind that there are reasons a female user might feel uncomfortable being told she has to broadcast her gender. Sure, someone's gender is usually obvious from their name, but there's no need to force people to draw extra attention to it—introducing myself with "Hi, I'm Randall." sends a different message from "Hi, I'm Randall, and I'm a MAN."

I don't think making this option mandatory is a significant cause of the major Google+ early-adopter gender split, but if you're worried about how few female users your project has, marginalizing their potential worries on your introductory screen doesn't seem very bright.

There are reasons Google+ might want your gender. For one thing, the interface may need to use pronouns, and in some languages there's no way to avoid this. We have a chat-bot in the #xkcd IRC channel which serves as a repository of user nonsense. At some point, we decided to program in the ability to use pronouns, and it was surprisingly complicated:

Now, I went out of my way to support the various options for referral that users asked for (although I drew the line at recently-invented pronouns like "xir"). But even covering the basics in English is tricky, and the situation gets more so in languages like Hebrew. (It looks like Google+ punts on that issue by making all "other" users male in all languages, which is a can of worms in itself.) Yet none of the linguistic issues mean you have to make gender a broadcasted part of the user's profile.

They also (obviously) want to know more about you so they can serve ads; advertisers care about gender. But again, that's no reason to make gender public.

The "other" option is nice, but I don't really feel comfortable setting my gender as "other". There are a huge number of people whose gender is actually best-described as "other", and they come in astonishing variety, even if you set aside the issue of social gender and just ask about biology. This article has a fascinating list of eleven particularly tricky situations that lead to someone having no easy-to-agree-on biological sex:

There are quite a few people who are accurately described by an "other" option, and when they're sometimes struggling for recognition, co-opting their label for anyone who doesn't want to broadcast their gender seems a little off-putting.

The bottom line is that there are a lot of reasons Google+ would want to ask about your gender. But there's no good reason to pointedly make it the only thing in your profile that can't be private—and many reasons not to, starting with basic courtesy. It may be a small issue in the grand scheme of things, but I think it's worth getting right.

(P.S. I know I post a lot about interface quibbles and feature suggestions—and I do use the feedback button heavily—but I don't want to give the impression I'm generally unhappy with Google+. Fundamentally, I really like this system, which makes me want to tweak things in this early-adopter period so it will be as well-designed as possible, so it will survive and be around for me to use for a long time.)"

What do you think?

Facebook prompted a similar outcry back in 2008 when they started requiring people to specify their gender (also in the name of grammar). They don't, however force you to make it public on your profile. So what do you think? Does this requirement bother you? Is it more of a problem for women than for men? Let us know in the comments below.

I have to admit, I've been on the other side of this. I never understood why keeping one's gender private would matter. Kind of surprising to have the man behind XKCD open my eyes to the anxiety this can cause for some people. And via Google+, no less...

Randall, spot-on! Well aware of many women's anxieties around this (often reflected in tweaked or neutralized email addresses as well); more so though in respect to the broad range of complexities you point to that most folks are entirely oblivious about. Only thoughtful changes to available categories will help with that, both for a base level of awareness as well as for folks directly affected. It might sound like an esoteric subject still, but it truly isn't, merely under-perceived. Way to go!

Julian, I totally agree. While I'm comfortable having people know what my gender is, I think for many people, they might have genuine safety issues with exposing their gender to the public.