Google started culling Google+ accounts. There are two main targets: businesses and those who are using pseudonyms. For businesses, Google is promising to provide their own version of Facebook Pages, which will be released later this year. For those who use pseudonyms, they aren't so lucky. According to Google+'s community standards, users must "use the name your friends, family, or co-workers usually call you". The purpose of this rule is ostensibly to discourage spammers and people from setting up fake profiles.

A user of Google+ found his account suspended because he did not use his real name (or something that sounded like one). Opensource Obscure, who uses this pseudonym in all his online activities, has not been able to regain his account, and it's kickstarting an important discussion about online identities, anonymity, pseudonyms, and real names. 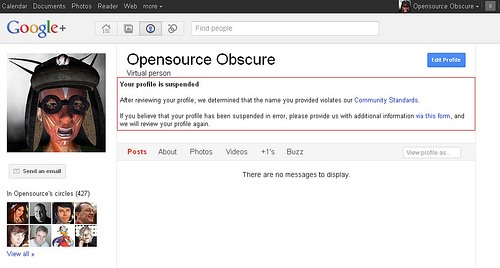 Facebook and LinkedIn also require the use of real names in order to use their social networks. Twitter does not, although they do verify accounts to authenticate the identities of users such as actors and journalists. For the major social networks, having members with their real names can foster a real sense of community, and encourage accountability. Organizations such as NPR have had to spend time and resources to address spammers and "trolls" - commenters who waste time provoking for the sake of attention rather than discussion.

On the flip side, people use pseudonyms for different reasons. You can establish a more concrete online identity with a pseudonym. My own experience bears this out—search for my real name on Google and you'll find about 50 Kimberly Laus. But there's only one "toastykitten". Some people prefer to separate their online identities from their "real" lives with a pseudonym. Others, especially women, may choose to use pseudonyms to avoid harassment. (From +Adele Shakal, a 2006 study found that people who used female names online received 25 times as many malicious messages as those who used male names.)

Should Google+ enforce the no-pseudonym rule? Or do people have a right to use pseudonyms on Google+?

On my Google account (which I have had since GMail) began, I have added about 4 of my alter email accounts. I use different of those emails for different things; one is for professional listservs, another is to sign up for freebies that for sure will invite spam, etc.
I am able to log into Google with any of those email addys, since I added them to my Google profile. Now... if Google would allow me to link my alternate names that I use to go with those alternate email accounts.. THEY would have the info, yet I could use my differnt handles. If I was reported for spamming or vulgarity whatever.. Google would know who I am, and could zap ALL of my emails and the single account OFF. Banish me.
Dont know if I am making any sense.
Piccolo Pete

Hi Sandra, I like your idea of using pseudonyms and real names for selected circles. I'd love that ability.

at the end of the day google will always have your computers isp address if any serious crap starts to happen.... by denying pseudonyms they'll be acting like worse policemen than facebook have been... I think it will be a catastrophic decision.... who wants to join a network that (might) behaves/censors worse than facebook... what's next, they'll start monitoring content for excessive boobage or nip slips?

it's annoying when people don't use their real name, but regulation and censorship is more annoying.

In support of pseudonym names. What if you don't like your real name, or it is hard to pronounce, what about wanting your privacy so kooks don't find and stalk you? Jeremy are you throwing us a loop with Throopity? LOL! Funny names can hurt your business - like Bob Fart, Fartner, Farter you get the message. It's turning so big brother anymore, no room to be creative.

My real name is Jackie Smith. Is it any wonder that I use Cybe R. Wizard? Many, many more people know me by that name than have ever known Jackie Smith. In fact, in some circles it is quite , um, infamous. ;-} Hey, most think I'm female from the, "Jackie," part.

Google+ will never work this way.
Better allow a pseudonym but do a identity-check before activating.

how would they be able to verify an identity check?

There are a few ways not always 100% though.
1) match phonenumbers, adresses and name (easy to do)
2) match personal id-number and/or passport number and name (easy in Holland and Turkey, not sure about other countries)
3) many countries like Holland have static IP-adresses and if they have these they can be checked troo

There must be a lot more ways.

hmm..I'm not sure #2 would be legal in the US, given a. a lot of citizens do not keep IDs or passports, and it would be considered an invasion of privacy. I guess the sticking point is where to draw the line at for privacy needs for consumers vs the needs of the corporation providing the service.

At the end of the day, it's their house, so their rules.
There's no compulsion to sign up

Ashish Us 8 years ago

My Google+ profile is suspended by google. I have submitted my photo id to G+ and the details of mine are real. I didnt get any confirmations from google. I am facing this isuue from last 2 years. I have lodged complaints many time but still its suspended.

Also I am uable to upload my own pic in gmail which again says the google plus account is suspended.
Kindly please get back my profile ASAP.