We're ending the week with a lot of big announcements and updates. To date, Google+ has updated its name policy, but is still forbidding pseudonyms. Blocking people on Google+ became even easier, and yesterday, games on Google+ launched.

Google+ has become infamous for its controversial name policy. Although Google+ has clarified its name policy, that still has not satisfied the "nym-ers"—those who want to use pseudonyms. There have been many reactions, including protests from people who've found themselves not just suspended from Google+, but unable to remove their data, or use other Google products such as Google Buzz or Reader with full functionality.

To that end, Google+ has announced another update to the name policy. +Saurabh Sharma, a product manager for Google+, explains that people with suspended profiles will be given a four day grace period to comply with the Google+ Community Standards. During the four day grace period, they can still use Google+ without restrictions. Users with suspended profiles can still remove their data from Google+ using the Google Takeout services, if they opt to leave the service.

So how difficult is it to get someone's profile suspended, anyway? Apparently, it's not all that hard. +Gary Walker (currently changed his name on Google+ to +Rainyday Walker, in support of Rainyday Superstar, who was suspended from Google+ twice for name violations) decided to test out the system. He created a fake profile with the same name, and reported it for impersonation. He discovered that reports of impersonation will result in a request for photo identification. Gary was able to get the profile reinstated by providing Google with a very obvious fake ID, which doesn't bode well for the Google+ verification system.

This week also saw the introduction of infinite scrolling in Google+ Photos, announced by +Roshni Malani. If you click on the "Your albums" link from your Google+ Photos page, you can view each album and continue to page down until you get to the end of the album. Some great examples to look through include +Dave Cohen's Flickr photos and +Thomas Hawk's gorgeous photos.

If you're an avid reader, check out Google Books. Google Books is both Google's online ebookstore and a place to put your own library, where you can track, tag and review what you've read. You can now link your Google Profile to Google Books, although this step is irreversible.

Linking your Google Profile to Google Books will allow people to see your book reviews and any "shelves" you've made public. If you don't want people to know what you've read, you can make your shelves private. However, you cannot make reviews private.

While browsing in Google Books, you can share any book to Google+ via the Share box. Doing so will create a link to the actual book itself, and you can write something to go along with the post. 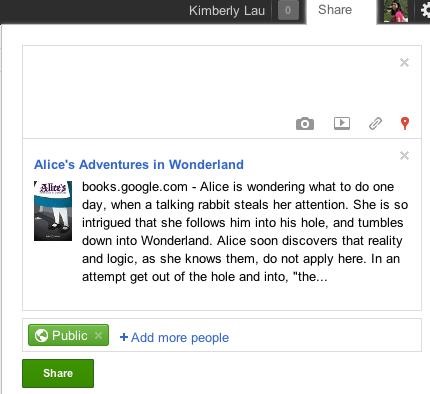 That just about wraps up this week; check in next week for all the latest news & tips.